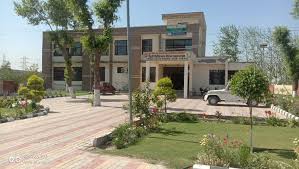 The name Tarn Taran, since appropriated by the town itself, originally belonged to the sarovar, so called by Guru Arjan. Literally it means, “the boat that takes one across (the ocean of existence)”. (Tarana in Sanskrit is a raft or a boat).

Tarn Taran is one of the border districts which lies in the North West frontier of Punjab and is bounded by district Amritsar in the north east, district Kapurthala in the east and district Ferozepur in the south east. The Tarn Taran district was formed in 2006 from Amritsar District and the declaration was made during the celebrations marking the martyrdom day of Sri Guru Arjan Dev Ji. With this, it became the 19th district of Punjab. It comprises of 3 tehsils and 8 community development blocks, 5 assembly constituencies and one Lok Sabha constituency. It lies between 31o 7’ and 32o 3′ North latitude and 74o 29’ and 75o 23’ in the East longitude. The District has about 240 km international boundary with Pakistan. It is bounded by river Beas in the south eastern side. According to the 2011 census Tarn Taran district has a population of 1,120,070. The district has a population density of 464 inhabitants per square kilometre (1,200/sq mi). Its population growth rate over the decade 2001-2011 was 19.28%. Tarn Taran has a sex ratio of 898 females for every 1000 males with a literacy rate of 69.4%.

About 4,192 ha area of the district is beyond the border wiring; Out of this area 3597 is cultivable. The average rainfall of the district is 482.9 mm. The crop productivity is very high in the district which has been achieved with assured irrigation, use of HYV seeds, good infrastructural support provided by Department of Agriculture, Krishi Vigyan Kendra and other related agencies. The district has mainly Rice-Wheat cropping system. In Rabi season major part of the area remained occupied by wheat, whereas, in kharif season, rice is a major crop. The area under vegetable crops is increasing regularly in the district with pea as one of the major vegetable grown in Rabi season. The fertilizer consumption of the district is nearly 185 kg per ha. The net sown area in the district is about 2.17 lakh ha, which is almost 100 % double cropped. However, in some areas of the district, farmers takes more than two crops in a year involving vegetables and summer moong in cropping system. Tube wells are the main source of irrigation. On other hand, as per 18th livestock census, district Tarn Taran has about 1644 and 3241 Sahiwal and Desi cows, respectively. Similarly, the district has population of 29339, 28278 and 218963, respectively of Murrah, Nilli Ravi and Graded breeds of buffalos.

Gurdwara Sri Tarn Taran Sahib is a gurdwara established by the fifth guru, Guru Arjan Dev Ji, in the city of Tarn Taran Sahib, Punjab, India. The site has the distinction of having the largest sarovar (sacred pool) of all the gurdwaras. It is famous for the monthly gathering of pilgrims on the day of Amavas (a no-moon night).

Khadoor Sahib is symbolically attached with the name of Guru Angad Dev Ji. This place got sanctified by the visit of eight Sikh Gurus. This town is quite easy to approach – being only 38 kms from Amritsar, 22 kms from Jandiala Guru, 20 Kms from Tarn Taran, 22 kms from Rayya and 9 kms from Goindwal Sahib. The second Guru of Sikhism spent about 13 years of their life at Khadoor Sahib, spreading the universal message of Shri Guru Nanak Dev Sahib Ji.

Gurdwara Chohla Sahib is situated at a village Chohla, about 4.5 km southeast of Sarhali Kalan in Tarn Taran district of the Punjab. The western edge of the village marks the spot, where Guru Arjan Dev ji sat and preached. The gurudwara comprises a marble floored hall in front of the three storeyed sanctum, where Guru Granth Sahib is seated on a canopied seat of white marble. The beauty of gurudwara is further enhanced by two Nishan Sahibs and holy flags at two corners in front of the hall. A small Sarovar (sacred pool) has been added in recent decades, an old well nearby is further believed to have existed since, the time of Guru Arjan Dev Ji.

Baba Budha Sahib Ji, a venerated figure in Sikhism, whose original name was Bura, was conferred this title of ‘Bhai Budha’ by Guru Nanak Dev Ji, because he possessed the wisdom of an old man in his childhood. Bhai Budha becomes a devoted disciple of Guru Nanak Dev Ji. He served the Gurus with complete dedication for all his life and set an example of holy living. He became the first high priest of sacred shrine, Golden Temple.